Our weekly Sunday Worship service starts at 11.15am and is an hour-long service of praise, prayer and the hearing of God’s word for the world.

Communion is celebrated on the 1st Sunday in the month, from September to June.

On the 3rd Sunday in the month, our service is usually a family sevice and is accompanied by our Praise Band.

Each Summer we join with our sister Church in Fintry to get together and worship as one body:

We also conduct a monthly service at the Strathendrick Care Home (3pm on the second Sunday of the month) from January to June and then from August to November.

The Orders of Service for each Sunday are placed on a dedicated webpage. These have a lot of information about upcoming events, meetings as well as prayer points and the bible readings for the week.

For some time now we have been recording sermons and making them available to anyone who requests them (contact us).

A list of important dates for the current year can be found on our Church Dates page.

Advent and Christmas
Advent is the four week period before Christmas. There are four Sundays in Advent for which we have four special services. We also have a Watchnight service on the night of Christmas Eve as well as a morning service on Christmas Day.

Easter
Easter is the season in which Christians remember the death and resurrection of Jesus. It is the most important festival in the Christian year. We hold Good Friday and Easter Sunday services.

Harvest Festival
Harvest Festival is one of the oldest known festivals. In the UK it is traditionally held on or near the Sunday of the Harvest Moon. Our service is often held on the first or second Sunday in October.

Remembrance Sunday
Remembrance Day – also known as Poppy Day or Armistice Day (the event it commemorates) – is a day to commemorate members of the armed forces and civilians in times of war, specifically since the First World War and is held on the second Sunday in November.We hold a special service, which includes the youth organisations in the village (i.e. Scouts and Guides), which concludes with prayers and layering of wreaths at the war memorial outside the church.


If you would like to support the work of our Church and the wider Church of Scotland during the time that our doors are closed, please contact our Treasurer, Debbie, on 01360 449180. 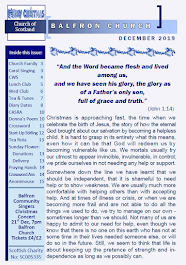 Details of how to find us can be found on our Visiting information page.